I spent an hour or so today putting up some material on my previously-barren office door, one page of which is the first in a new series, ‘Doorworks’.  These will normally be an image or plate of something related to my core research interest in numeration, followed by a brief description.  Since none of you (to my knowledge) are anywhere near my office door, I thought I’d post them here as well as I put them up (once every week or two), to give you a sense of the sorts of individual objects and texts that interest me. Enjoy! 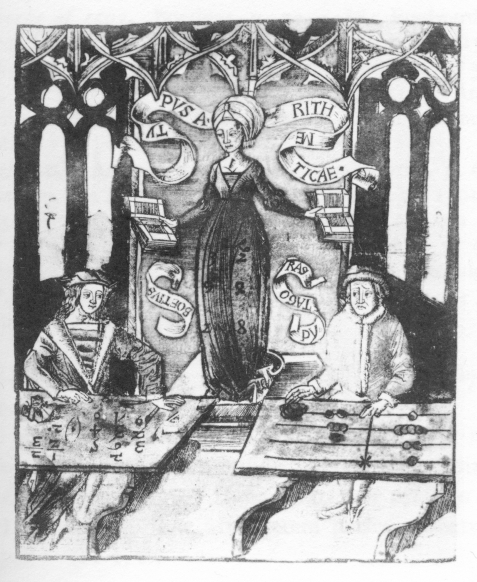 This plate is an allegorical representation of Arithmetic as a female figure bedecked with Western (Hindu-Arabic) numerals. At her left hand sits Pythagoras, using the counting-board (abacus) with loose pebbles on lines. At her right hand is the sixth-century philosopher Boethius, once thought to be the inventor of Western numerals. By turning her head towards the latter man, Arithmetic indicates her favor to the new system. The discourse over the efficiency of different arithmetical techniques (e.g. Roman vs. Western numerals) reached its climax in the fifteenth and sixteenth centuries, as the newly literate middle class moved away from arithmetic as traditionally practiced in medieval universities, and as commercial arithmetic texts began to be produced in large quantities advocating the newer Western system.