This manuscript is a juvenile work probably composed on 02/06/2010. There is textual and ethnographic evidence to suggest that the scribe (age 4.5) was aided by a more competent master. Currently the MS is magnetically affixed to the archivum refrigeratum in the scribe’s home. 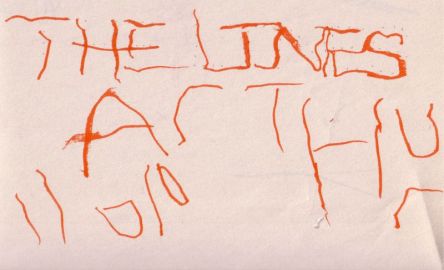 l. 1: Written in a bold majuscule hand in orange ink. Dotted pencil marks underlying the ink suggest that this line was prepared by the scribe with the aid of a master, an observation later confirmed ethnographically.
l. 2: Written in a hybrid minuscule/majuscule hand; H dips well below the line. Absence of pencil marks and unusual features of the hand suggest that it was composed unaided (confirmed ethnographically).
l. 3: The final character ‘r’ at the right margin seems to be properly attached to the end of l. 2; it is spaced significantly apart from the unusual characters at left. The reading ‘11010’ as an Arabic numeral is improbable given limitations on scribe’s counting abilities. Ethnographic interview with scribe’s assistant/instructor/mother confirms that this is a hybrid notation for the date of composition, 2010. Upon learning of the custom of dating the frontispieces of books from his mother, the author inquired how to do so, and was told, “Put 2-0-1-0”, at which point he wrote the characters ||, then paused and examined the characters. At this point his mother informed him that he could just write the number 2, to which he replied, “That is a 2, in lines.” Thereupon he continued to write the final three characters, noting, however, that the last 0 “is more of an oval.”

One is reminded of the unusual notation developed by Ocreatus in his 1130 Helcep Sarracenicum ‘Saracen Calculation’ which combines the ordinary Roman numerals I, II, III … IX with a circle for O, thus producing a mixed system of the additive Roman numerals and positional Western numerals (Burnett 2006; Chrisomalis 2010: 120). Thus, Ocreatus wrote 1089 as I.O.VIII.IX. Attested in only one MS (Cashel, G.P.A. Bolton Library, Medieval MS 1), this notation represents an effort to incorporate positionality into existing systems of notation, and is related to the debate between the abacists and algorithmists over the proper contexts of use for the newer Western numerals.

Despite the temptation to see in this line a re-invention or re-discovery of Ocreatus’ notation, the ethnographic evidence suggests that this is unlikely. Although the author is familiar with Roman numerals in the context of clocks, the description of the characters || as ‘lines’ rather than ‘numbers’ or ‘Roman numerals’ suggests instead an effort to incorporate tallying principles. It is probable that the Roman numerals derive ultimately from an as-yet unattested Italic practice of tallying used in the 6th century BCE or earlier (Keyser 1988; Chrisomalis 2010: 95-6). Yet tallying is distinct from cumulative-additive numeration like the Roman numerals in that it is produced sequentially as an open-ended count; one cannot simply add signs to the Roman XIII – the equivalent tally might be IIIIVIIIIXIII (Chrisomalis 2010: 15). It is therefore probable that this notation represents the scribe’s attempt to combine the elementary tallying principle of one-to-one correspondence with the familiar Western numerals.

The ethnographic evidence that the scribe paused (as if bemused) upon the production of || might suggest that this form is a scribal error; given, however, that he is conversant with the Western numerals and is capable of producing them unaided, the hypothesis cannot be discounted that the use of || for 2 represents an aesthetically motivated decision. While the title of the work, ‘The Lines’, may refer to the vertical and horizontal lines in fol. 1v and 2r, it may equally be a reference to the lines in the date in fol. 1r.